$2 per person suggested donation for admission to the museum.

Dogs are not permitted on museum grounds or in the museum, with the exception of service animals.

Casa Grande is closed temporarily starting November 21st 2022.  Our power and HVAC issues need to be addressed to ensure the safety of our public and our employees.  For questions, email [email protected]

After visiting the Museum, our Gift Shop is the perfect place to pick up souvenirs that focus on history, geology and interpretive souvenirs. This gift store offers items related to the Almaden area and the mining experience.

The stately 1854 Casa Grande manor sets the stage for visitors to discover the significance of local mercury mining to the California gold rush, the evolution of processing cinnabar into mercury, and the lifestyles of mining communities at New Almaden.

Exhibits invite visitors to walk back in time by viewing late 19th century photographs of the underground mine workings and mercury processing, as well as a diorama that duplicates the interior of a mine shaft. Artifacts from Cornish, Mexican, and Chinese mining families depict the diversity of people that once lived and worked together on "the hill." Casa Grande's antique-furnished parlor, library, and drawing room reflect the lifestyle of a mine manager's family.

Be sure to check our online historical collections to see photos, documents, and artifacts from the New Almaden Quicksilver Mining Museum. You can also view artifacts from Martial Cottle County Park or Joseph D. Grant County Park and can request images from us.

Mining operations in New Almaden first began in 1845 under the claim of Mexican Cavalry Officer Captain Andres Castillero. Castillero discovered that the red rock used by the local Ohlone people to paint the walls of the Santa Clara Mission was cinnabar, an ore containing mercury. The valuable mercury was needed to process silver in Mexican silver mines.

Henry Halleck, who led the management of the mines under the direction of early mine owners Baron and Forbes, had the Casa Grande ("the big house") designed and built by architect Francis Meyers in 1854. The six-acre grounds were later landscaped by John McLaren, designer of San Francisco’s Golden Gate Park. For decades, this classic revival-style mansion served as the official residence and office for a succession of mine superintendents, and as a country weekend retreat for wealthy mine investors.

The Casa Grande once boasted 27 rooms. The basement consisted of the kitchen, dumbwaiter, servant quarters, food storage, and a large vault for depositing liquid mercury, also called "quicksilver." After the closing of mine operations, the Casa Grande had a succession of private owners and served a number of purposes, including a tourist resort and recreational facility known as Club Almaden.

In 1973, the Santa Clara County Parks & Recreation Department began purchasing the old mine properties. In 1985, the Department purchased a private collection of mining artifacts from Constance Perham, a resident of New Almaden. From 1949 to 1983, Mrs. Perham had displayed mining artifacts, memorabilia, and photographs in her private "museum" in the historic village. The Parks Department leased the museum site from 1983 to 1998, and the New Almaden Quicksilver County Park Association volunteers maintained the collection and exhibits, as well as provided tours about the history of New Almaden and the Quicksilver Mines.

In 1997, the Casa Grande once again was offered for sale, and the County Parks Department seized the opportunity to add the National Historic Site to Almaden Quicksilver County Park. The existing museum collection moved to the Casa Grande, where park staff and volunteers erected a new exhibit space. The new museum opened on July 3, 1998. After an extensive building renovation from 2009 to 2010, the newly expanded museum once again opened in January 2011.

How to Get There

Casa Grande and the New Almaden Quicksilver Mining Museum are located at 21350 Almaden Road in San Jose. Casa Grande is the impressive white building with picket fencing just past the Post Office. The Club Almaden sign is still up on the large redwood tree at the entrance.

From Highway 85 take the Almaden Expressway exit south 6.5 miles to Almaden Road. Turn right on Almaden Road and proceed 2.5 miles west to the town of New Almaden. The Casa Grande will be on your left.

From Highway 880 take 101 south to 280 north (toward San Francisco). Exit 280 at Hwy. 87 (Guadalupe Parkway) south. Exit Hwy. 87 at Almaden Expressway south (to the right). Proceed about 8 miles to Almaden Road. Turn right on Almaden Road and proceed 2.5 miles to the town of New Almaden. 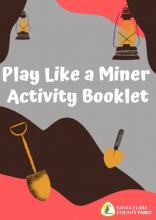 Fill out your fun Play Like a Miner Activity Booklet about mining life by downloading it here​.

Our Play Like a Miner​ videos will help you with some of the activity pages and learn secret code words:

Watch our Life as ​a Miner​ video to see how miners worked, then build a blanket tunnel at home!

Watch Eat Like a Miner​ video to learn how to make a Cornish pasty.

Watch The GREAT Chocolate Chip Cookie Mining Competition​​​​ with Park Interpreters Rachel and Victoria who compete to mine the most chocolate chips and learn how mercury mining that was important to the gold rush.

Remember to write down your code words in your activity book. Then fill them into this submission form to win a prize!  There’s no deadline to submit your answers and claim your prize!​

For groups of 15 or more, please book in advance through our Custom Tour – At a County Park request form on our education page. For additional information, you may email park interpretive staff at [email protected] or call the museum main line at (408) 918-7770.

For additional information about our programs at Almaden Quicksilver Mining Museum and teaching resources, you may email park interpretive staff at [email protected] or call the museum main line at (408) 918-7770.

In compliance with the requirements of Title II of the Americans with Disabilities Act of 1990 (‘ADA”), the Santa Clara County Parks and Recreation Department will not discriminate against qualified individuals with disabilities on the basis of disability in its programs, services, or activities. The Department will make reasonable modifications to policies and programs to ensure that people with disability have an equal opportunity to enjoy our programs, services, facilities, and activities. If you need assistance with an ADA request, please contact our ADA Coordinator