Grant Park is located at the base of Mt. Hamilton. The major feature of the park, the Halls Valley is suspended between two ridges in the Diablo Range of the Coastal Mountains. The park's terrain was formed by earth movement along the still active Calaveras Fault.

The oak-woodland community at Grant Park is typical of California. Oak trees provide breeding habitat and food for over 32 species of birds and 39 species of mammals. This habitat is so unique and important to wildlife that its protection is essential. The oak community includes such species as the Blue, Black, Live, and Valley Oaks.

At one time, Grant Park was the location of a successful wildlife management plan designed to re-establish the threatened Tule Elk population. Although most of the herds have now migrated out of the park, Grant was selected because of its wildlife sanctuary status and ideal habitat.

Visitors may see European wild pigs in some areas in the park. These pigs have cross-bred with domestic pigs. The pigs eat acorns and grass roots, therefore, they have to "root" for their food.

Spring is one of the best times to view the flora and fauna at Grant Park. The wildflowers are blooming, the water is flowing, and the grass on the hills dance in the wind.

The land that is now Grant Park was first inhabited by Werwersen Ohlone Indians.

In 1839, a 15,000-acre Mexican Land Grant was awarded to Jose de Jesus Bernal and was named Rancho Canada de Pala. Jose de Jesus and his two brothers built adobes around a spring-fed pond on a ridge overlooking the Santa Clara Valley. They pastured cattle and horses on this land. Bernal's uncle, Joaquin Bernal, occupied the nearby Rancho Santa Teresa.

In 1848, the southern third of the rancho was sold to Samuel Q. Broughton for $600. Broughton was a native of Kentucky who had served under Col. John C. Fremont. Over the years, other parts of the Rancho were also sold or deeded. When the Federal Land Act of 1851 required landowners to file land claims, Jose Bernal paid his attorney, Frederic Hall, with land for processing his claims. The "Halls Valley" area which encompasses most of the present day park, represents this payment. Other early purchasers included members of the Donner Party.

Adam Grant, the father of J.D. Grant, bought his initial holding of Canada de Pala in 1880. Adam Grant was a founder of Murphy, Grant, & Company, a dry goods store which sold supplies to gold miners. 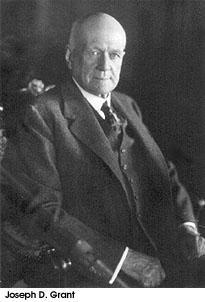 Grant changed the name of Bernal Lagoon to Grant Lake, built dams and diverted streams. He remodeled the original house which was built in 1882, and added a cookhouse, servants quarters, other houses and buildings, a rose garden and a large aviary to the property.

J.D. also used his influence to have Mount Hamilton Road moved one-half mile northeast of his home so it would not interfere with his privacy. Entertainments on the ranch included swimming in the pool and horseback riding through the rambling hills.

In addition to managing his father's dry goods business, J. D. Grant founded the Columbia Steam Company, served as President of the California-Oregon Power Company, and served on the Board of Directors of the General Petroleum Company and the Central Pacific Railroad.

Grant owned mansions in San Francisco, Burlingame, and Pebble Beach. He was a member of the Bohemian Club and was a life trustee of Stanford University. Grant also belonged to the Sierra Club, and was president of the Save-the-Redwoods League for 21 years. 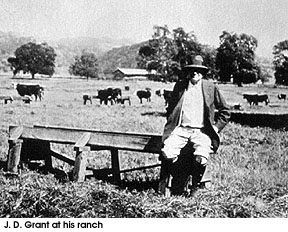 When Joseph D. Grant stayed at his ranch, he entertained guests such as Leland Stanford and Herbert Hoover. Hoover stayed at the ranch for a month after his election loss to Franklin Roosevelt.

Joseph D. Grant died in 1942, and was followed in death by his wife, Edith, in 1946. After her parents' death, their daughter, Josephine, purchased shares in the ranch from her two siblings and became sole owner of the property. Josephine became a full time resident of the ranch in 1958 and remained at the ranch until her death in 1972.

Josephine Grant's will deeded half of the ranch property to the Save-the-Redwoods League and the other half to the Menninger Foundation. The property was purchased by Santa Clara County in 1975 to be preserved as a park. In 1978, Joseph D. Grant County Park, named after the man and his family who had owned the property for nearly 100 years, opened to the public.